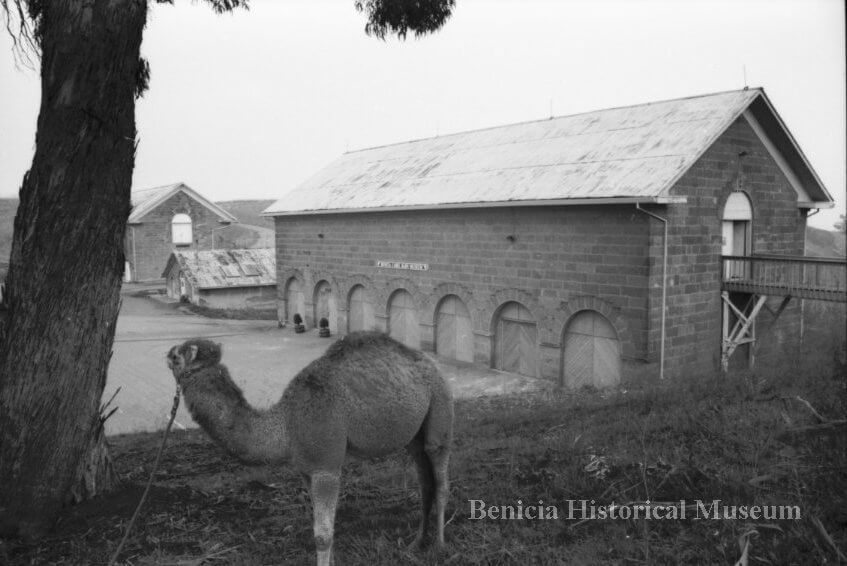 The U.S. Army’s experiment in using camels to haul supplies in the 1850s and 1860s has been described in scores, if not hundreds, of research papers, government reports, newspaper columns, books and even a couple of movies. The offbeat venture got off to a good start but was all but over in 1864 when nearly half of the ungainly pack animals were auctioned off at the Army’s Benicia Arsenal.

In November 1863 the Army ordered its 37 camels in Southern California to be herded to the arsenal, on the Carquinez Strait just north of San Francisco. The camels arrived in January 1864, and were corralled behind two still-standing storehouses – now part of the Benicia Historical Museum’s camel barn complex. An auction was held on Feb. 26 and Samuel McLeneghan, who had worked for the Army as a camel teamster, was the highest bidder, paying $1,945 for the “ships of the desert.”

McLeneghan used some of the camels to haul freight in Nevada where silver mines were booming, and sold others to farmers, miners and a circus owner. Some also went to frontiersman and Army veteran Edward Fitzgerald Beale, who seven years earlier had led a military expedition that brought 25 camels about 1,200 miles from Texas to California.

McLeneghan didn’t leave for Nevada Territory until late April 1864, as winter let up in the Sierra Nevada mountains. Following the February auction he had stabled 10 camels near Sacramento, and old newspaper stories state that many curious residents came to see his “strange beasts.” Sensing opportunity, he organized a well-publicized “grand dromedary race” that drew about 1,600 spectators on April 8. That was followed by another race in Marysville — and both were fiascos. The Marysville event ended with McLeneghan getting thrown off his seven-foot-tall camel as it chased a mule around an oval track.

The Army’s 44 remaining camels, at Camp Verde, Tex., were auctioned off for $1,364 on March 4, 1866, to Bethel Coopwood, a San Antonio lawyer. Like McLeneghan, he sold some to a circus – for $3,745. He used his profits and the remaining camels to start a freight and mail business from San Antonio to Mexico City.

While the Army’s experiment had ended, camels didn’t disappear from the landscape in the West and Southwest. Besides those in use in private enterprise or in circuses or zoos, others had been turned loose in the desert where they roamed for years, astonishing travelers who spotted them. The last of the Army’s original camels, named Topsy, reportedly died in April 1934, at the Griffith Park zoo in Los Angeles, at age 80.That’s double the average age of camels, but zoo staffers said Topsy benefited from good care.

An Army Historical Foundation account states that in the 1830s America’s westward expansion was being hampered by harsh terrain and weather, especially in the southwest. The use of camels as pack animals was recommended by Army Lt. George Crosman, who stated in an 1836 report that camels could carry loads of up to 900 pounds, go without water for long stretches and cover 30 to 40 miles a day over rough land.

The report was ignored, but in 1847 Crosman, now an Army major, urged Maj. Henry Wayne of the Army’s quartermaster department to try again. Wayne pitched the idea to the War Department and Congress, and caught the attention of then-Sen. Jefferson Davis of Mississippi. Davis, also encouraged by Edward Beale, tried for several years to get a skeptical Congress to approve funding for camels, and finally succeeded in getting $30,000 after being appointed secretary of the War Department by President Franklin Pierce. In May 1855 he appointed Maj. Wayne to head to the Middle East on a borrowed Navy ship, the USS Supply, and return with camels.

The camel-shopping took several months, with stops in Malta, Greece, Turkey and Egypt. Finally, in May 1856 the Supply unloaded 34 camels at Indianola, Tex., and was soon headed back to the Mediterranean. The ship returned in January 1857 with 41 more single-humped dromedaries and Arabians and double-humped Bactrians.

In addition to the camels, the Army also brought back several expert camel handlers, the best known being Smyrna native Hadji Ali. Nicknamed “Hi Jolly” by his American counterparts who had difficulty pronouncing his name, Hadji Ali worked with camels for many years, first for the Army and later for private entrepreneurs.

Maj. Wayne, moving the first load of camels to Camp Verde, Tex., stopped in the town of Victoria. There, local resident Mary Shirkey gathered some fleece shorn from the camels and knit a pair of socks for President Pierce, who reciprocated by sending her an engraved silver goblet. The socks are long gone, but the goblet reportedly is still in the hands of Shirkey descendants.

The camels worked out well on two surveying expeditions, including a four-month trek in 1857 that ended at Fort Tejon, about 75 miles northwest of Los Angeles. The surveyed route was first known as the 35th Parallel Wagon Road. Now it’s part of celebrated Route 66. A second survey in 1858 extended from Fort Smith, Ark., to the Colorado River and took nearly a year to complete. But two other tests in Southern California in 1860 and 1861 were failures, and the advent of the Civil War effectively halted any further experiments. Among various factors contributing to the unraveling of the Army’s experiment was the reluctance to continue a project associated with Jefferson Davis, who in 1861 had become the president of the Confederacy.

Confederate troops occupied Camp Verde in early 1861 and the camels at that location were finally recovered at the end of the war in 1865 and sold at auction a year later. The herd based at Fort Tejon was transferred from post to post in Southern California in the same time frame but saw little use. Finally, Secretary of War Edwin Stanton ordered them to be sold. That led to the Benicia Arsenal auction in 1864.

Original Article on the Times-Herald website can be found here.

Benicia, Vallejo, and other Solano County communities are treasure troves of early-day California history. Brendan Riley’s “Solano Chronicles” column, running every other Sunday in the Vallejo Times-Herald, highlights various aspects of that history. His source references are available upon request. If you have local stories or photos to share, email him at genoans@hotmail.com. You can also send any material care of the Times-Herald, 420 Virginia St.; or the Vallejo Naval and Historical Museum, 734 Marin St., Vallejo 94590.