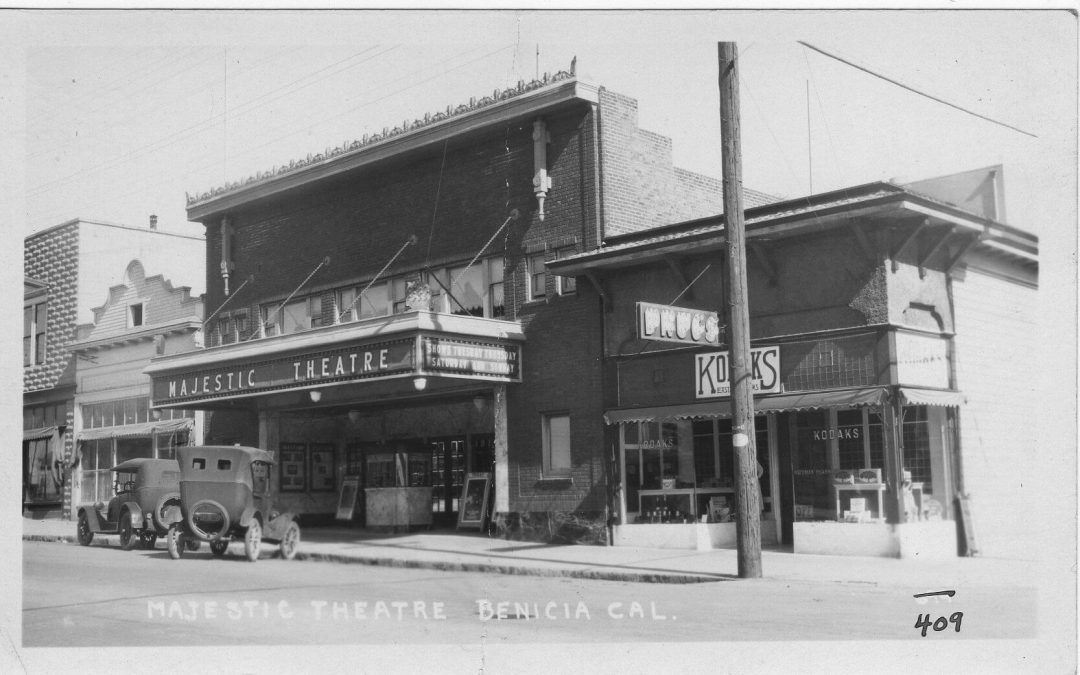 The Majestic Theatre in Downtown Benicia opened with great fanfare on February 23, 1920.  By 7:30 PM – opening time – there were more than 1200 people waiting to be admitted, with only half of the people fortunate enough to get in at the first show! It was reported in the Benicia Herald-New Era newspaper as “…One of the most successful affairs ever had in Benicia.” The building was described as having beautiful marble facings; mirrored doors; an artistic box office; one of the best screens on the market; rich draperies in gold, mulberry and blue; 600 leather-covered seats; an impressive rectangular marquee as well as a red brick exterior and many fairy-like twinkling lights! The opening picture was A Daughter of Two Worlds starring Norma Talmadge. They also ran a two-reel comedy titled Head Waiter. The operating room or projection room was on the mezzanine floor and was completely fireproof — the chemicals used to produce early films were highly flammable.

Presiding over the opening event was Chamber of Commerce president H. J. Lynch who complimented Mayor W. L. Crooks and his son W. B Crooks upon their enterprise and faith in the future of Benicia in erecting so handsome a structure.  A tribute was given to architect James W. Plachek of Berkeley whose later went on to design such Berkeley structures as the Farm Credit Administration Building and the Hall of Justice; the Federal Land Bank on Fulton Street; the main public library and its branches in Claremont, South Berkeley and North Berkeley; fire houses in various parts of the city, the Glide Memorial and the UC Theatre on University Ave. among others.  The builder was Henry W. Macullough who was also from Berkeley.  Much praise was given for their architectural correctness and good workmanship.

Fresh air was constantly being circulated by the ventilating system — all the air in the building was refreshed every two minutes!  Another feature of the theatre was the $14,000 pipe organ.  It had sixty-four stops and a double touch in the keyboard whereby the performer could play an accompaniment to the solo on the organ.  The pipes were hidden behind the proscenium arch.

Other notable films shown at the theatre were the original Phantom of the Opera  in 1927 with Lon Chaney as well as God’s Great Wilderness with Lillian Rich and comedy films such as Felix in Barn Yarns.

This beautiful theatre had a fire in the 1940s.  It was remodeled and renamed the State Theatre on June 11, 1942.  Subsequently, various owners operated the building as a cinema, a children’s playhouse, and even as a church. It was deeded to the nonprofit Majestic Theatre Corp. in the early 1990s, whose goal it was to showcase live entertainment which included many successful comedy shows and musicals.  The theatre is currently owned by Robert Reichert of Martinez.

This iconic landmark is a treasure that Benicians always enjoy visiting on the rare occasions it is brought back to life with community productions.