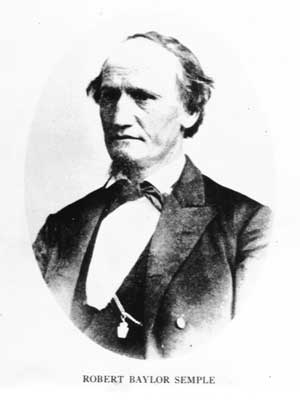 In June of 1846, Robert Semple, a young dentist and journalist from Kentucky was escorting Mexican General Mariano C. Vallejo to Sutter’s Fort in Sacramento.  It was then that he saw the Strait of Carquinez for the first time. Most of the land north of the strait was owned by General Vallejo.  Later, Semple and Vallejo came to an agreement that they would found a town on the land.  Vallejo deeded a half-interest in a large tract to Semple on December 22, 1846 with the agreement that it would be named after Vallejo’s wife, Francisca Benicia Carillo de Vallejo.  Her first name, Francisca, was the original choice.  However this conflicted with the newly designated town of San Francisco.  Therefore it was decided to use her second name Benicia. In 1847, Semple enlisted the support of the prominent American settler Thomas O. Larkin.  Semple and Larkin each took half-interest in the land paying Vallejo the nominal sum of $100.

The first settler William I. Tustin who had been living in Sonoma, arrived in Benicia with his wife and son in late June of 1847 to find nothing but surveyors’ stakes and fields of grass.  Tustin’s forty foot by eighteen foot adobe house was the first building in Benicia.  It was quickly followed by a wood frame home built by Semple then another adobe built by Benjamin MacDonald which was quickly turned over to Captain E.H. von Pfister and became a store during the day and an informal hotel at night.  By 1848 Benicia had fifteen buildings, a wharf,  a hotel, and enough people had settled to receive a local government.

Early in 1848, Charles Bennett and a companion, stopped at Von Pfister’s place on their way to Monterey.  They entered the store in the midst of a discussion about how lucky the man who discovered coal in California would be.  Bennett could not resist from boasting, stating “Coal! I’ve got something here which will beat coal and make this the greatest country in the world!” at which he spilled out on the counter approximately four ounces of gold nuggets up to the size of a pea.  The secret out, Benicia quickly emptied of all able-bodied men, but despite this, Benicia continued to boom during the Gold Rush era although not to the extent that Semple and Von Pfister hoped it would.

By November 1850, there were over one hundred homes in Benicia and the Pacific Mail and Steamship Company which carried mail and freight between California and the Isthmus of Panama set up its shops and wharves in Benicia.  This made Benicia the home of the first really large industrial works in California.  They remained in Benicia until 1869 when they moved to San Francisco.   Benicia was also the first city in the new state of California to be incorporated and at the same time was named the county seat of Solano County.

The removal of the state legislature was a hard blow to the future of Benicia.  Many merchants and businessmen who came to the city when the legislature arrived moved elsewhere. Benicia did maintain a certain importance due to the prominent people who remained there from the beginning such as Serranus Clinton Hastings, who later became chief justice of the California supreme court, and Lansing Bond Mizner who was a prominent judge and diplomat.