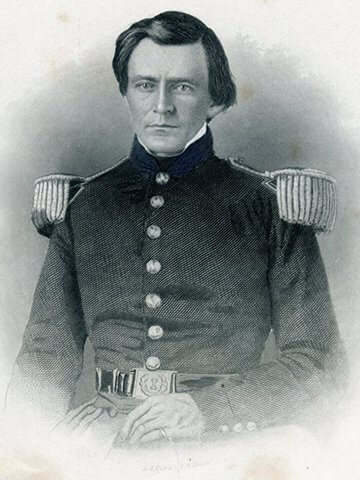 On July 23, 1885, just after completing his memoirs, Civil War hero and former president Ulysses S. Grant died of throat cancer.  A brief biography of Grant can be found on the History Chanel Website at https://www.history.com/this-day-in-history/former-president-ulysses-s-grant-dies

Grant spent several days in Benicia during his stint with the 4th Infantry Regiment, which spawned a number of myths over the years.  In an article published by the Benicia Herald in September of 2013, our current Museum Research Historian, Dr. Jim Lessenger, outlined the true story…

U.S. Grant jailed in Benicia — a myth that needs debunking

THERE ARE SEVERAL VERSIONS OF THE STORY OF ULYSSES S. GRANT IN BENICIA. One legend and its variations have it that he was incarcerated, for drunkenness, in either the old Benicia Barracks guardhouse or the newer Benicia Arsenal guardhouse. Another myth relates that the “young lieutenant” was subjected to a “little trial” in which, according to variations, he was either acquitted or convicted and incarcerated — or not. Another story has him reprimanded in California by his superior officer for drinking on duty.

A variation of the myth that actually made it onto the city of Benicia’s tourism website and was repeated in the pages of The Herald on Sept. 3 states that Grant replaced Lt. William Tecumseh Sherman at the Benicia Arsenal and was incarcerated in the Arsenal Guardhouse for 30 days because he was drunk and fired a cannonball at Martinez.

So, what are the facts?

Ulysses S. Grant was the victorious fighting Union General of the Civil War. After successes at Vicksburg and elsewhere, President Lincoln tapped him to lead the Union Army. Grant engineered a multi-pronged attack on the Confederates that ended in General Robert E. Lee’s surrender at Appomattox. Grant was later elected president of the United States and served two terms highlighted by his dedication to carrying out Lincoln’s policy of emancipation of slaves, increased industrialization, the transcontinental railroad and westward expansion.

According to the well-researched and highly regarded books “Grant” by Jean Edward Smith and “The Trial of Grant” by Charles G. Ellington, the stories about Grant having been tried and incarcerated in Benicia — or anywhere else — are absolutely false.

Here is the true story.

The year was 1852 and Grant was a 30-year-old battle-hardened brevet (temporary) captain when he landed in Benicia with the 4th Infantry Regiment on the sailing ship “Golden Gate” bound out of Panama. In the nine years since he had graduated West Point, he had served frontier duty in Texas and fought in 10 battles during the Mexican-American War. He was decorated for gallantry in action and was wounded.

When ordered to California, Grant left his pregnant wife and young son with his parents in Illinois. The voyage to Panama was in a cramped ship and the trip across the isthmus of Panama hellish for the 4th Infantry. One-seventh of the troops and many family members died from malaria, dengue fever, yellow fever, cholera and dysentery. Most of the children under 2 perished. Grant, the regimental quartermaster, was credited with saving large numbers of soldiers and their families by demonstrating strong leadership and personal initiative. Several acts of Grant’s heroism were documented in the regimental history. But he lost a lot of equipment to theft and accidents, such as pack animals falling into rivers.

The 4th Infantry and Grant went to Benicia to recuperate. Contrary to myth, Grant, an infantry officer, was not assigned to the Benicia Arsenal. It was staffed by ordnance corps officers. He was quartered for a short period of time at the Benicia Barracks, a wooden set of buildings that burned in 1922 and stood where the AMPORTS parking lot is now located. Grant certainly didn’t replace Sherman, another infantry officer, at the Arsenal or Barracks.

According to his autobiography, Sherman never commanded any of the three elements at Benicia. His only contribution to Benicia history is that he surveyed the boundaries between the city and the Barracks and Depot — a survey that was still valid in 1964 when the city of Benicia purchased the Arsenal from the U.S. government.

By all accounts, including Grant’s autobiography, the 4th Infantry was only at the Benicia Barracks for two weeks. Grant was in Benicia for only a few days. While there, he took a trip to Stockton to visit his brother-in-law and another to San Francisco. At the close of his Benicia duty, he faced an official Board of Survey — not a trial — “to investigate and report upon the losses and damages to public property” that had occurred in Panama under Grant’s charge as the regimental quartermaster. Such a board was a normal military administrative device to determine liability for the loss of $1,350 worth of supplies.

In terse prose, Grant wrote of the cholera epidemic among the troops and families and the necessity of employing native porters. Other officers and families testified to his leadership and courage during the crossing. Several acts of heroism on Grant’s part were documented. The board found no fault with Grant and “concluded that every exertion was used by officers to protect public property from loss or damage.” Grant would remember the crossing of the isthmus for the rest of his life. Later, he became the first president to call for a canal in Panama.

The myth of Grant’s trial and incarceration in Benicia doesn’t make sense anyway. Grant, a commissioned officer and brevet captain, would never have been incarcerated for drunkenness. A commissioned officer would not have been remanded to the stockade — that is, a guardhouse — for 30 days without a trial. The only “trial” a commissioned officer could have been subjected to under the Articles of War in effect at the time was a general court-martial, an event that would have been recorded in detail and would have lasted longer than the two weeks the regiment was in Benicia. No such record exists, and a lot of people have looked. On the other hand, there are plenty of records in the Army’s Judge Advocate General archives of the courts-martial of famous officers such as George Armstrong Custer and John C. Frémont.

It is entirely possible that the Arsenal, which became fully operational two years after Grant left Benicia, would have tested cannons by firing them across the Carquinez Strait. There is documentation of artillery testing ranges during World Wars I and II that involved firing at targets located in the Suisun Marsh. According to the Corps of Engineers historical study, the atomic cannons were constructed at Yuba Manufacturing in Benicia during the 1950s and 1960s and tested by firing test rounds into a target on Grizzly Island. But there is no documentation to suggest that Lt. Grant fired cannon at Martinez — drunk or sober.

From Benicia, Grant and several companies from the 4th Infantry sailed to the Columbia Barracks in Oregon. The mission was frontier duty, which meant protecting the local farmers, loggers and fishermen from the Indians, and vice versa. In reality it was a cold, wet, dismal and isolated assignment at a location on the far side of a vast continent — far from his wife and two children.

In Oregon, Grant became increasingly depressed over his health, which had not yet recovered fully from Panama, and over being separated from his wife and children whom he loved dearly. He also was troubled by his inability to earn enough money by farming to bring his family to California.

In that era, an officer joined a regiment and stayed with it until he was promoted to a divisional, training or staff assignment. There was no time limit on how long the regiment would remain on the West Coast, and many officers brought their families with them. Grant, with no source of money other than the Army, couldn’t afford to bring his family around Cape Horn to California and was faced with a long separation. He started to drink.

In the spring of 1854, Grant was transferred to Fort Humboldt, California, another cold, wet, windy and isolated frontier outpost. He became more morose and continued to drink. Finally, according to Smith’s book, he was confronted by his commanding officer while intoxicated during pay call. He was given the choice of resigning or being court-martialed and chose the former, mainly because he was already fed up with the Army and lonely for his family.

Grant resigned from the Army on July 31, 1854 — the same day that his commission to full captain arrived. He returned to New York via San Francisco and the Horn of South America on a sailing ship, never returning to Benicia. His Army files show no evidence of any wrongdoing.

The source of the myth of Grant’s incarceration in Benicia is hard to trace. It appeared in a historical booklet produced in the 1960s as part of a promotion for the Industrial Park. It also appeared in various newspaper articles as far back as the 1930s. The earliest documented tale of Grant’s local malfeasance was in an “Old Timer’s” article that appeared in the Benicia New Era newspaper at the turn of the last century.

The original article can be found online here: https://beniciaheraldonline.com/u-s-grant-jailed-in-benicia-a-myth-that-needs-debunking/